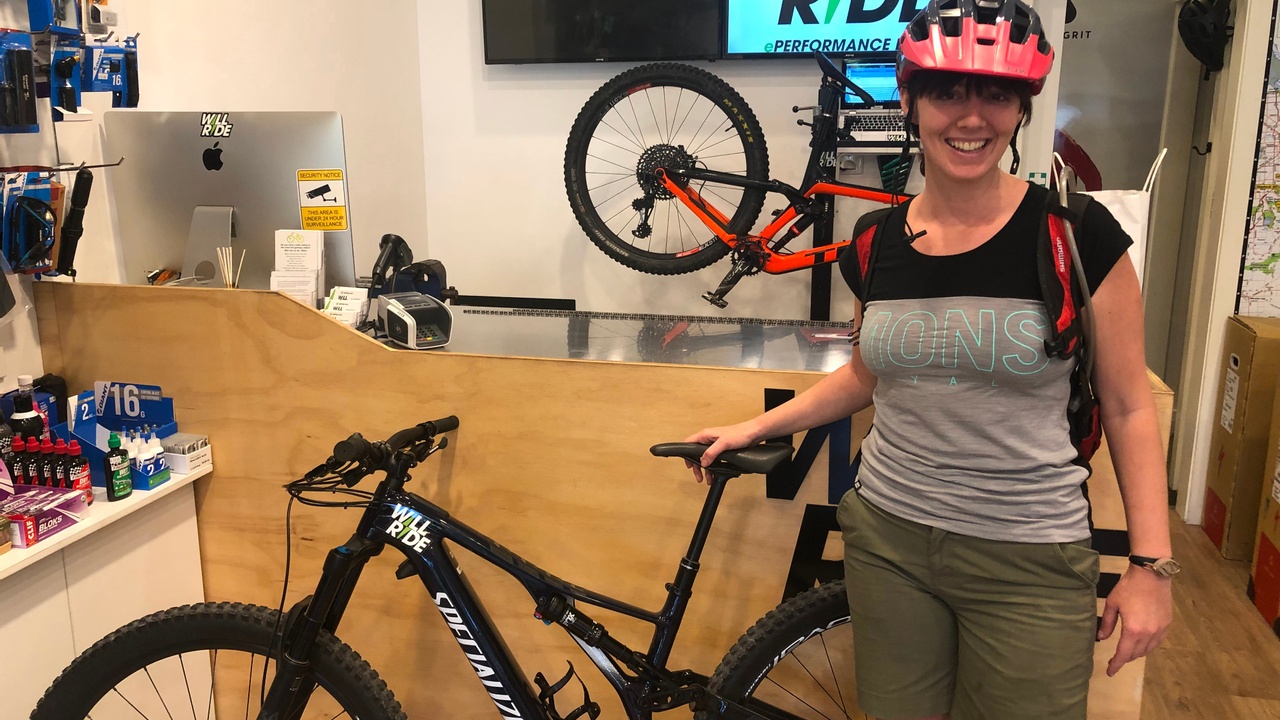 10 Unexpected Things I Discovered on My First eBike Ride

Note: This is less of a product review and more of an ‘experience review’. What does that mean? Well, I’m not looking so much at what gear it has on it (though you can check it out here if you really are interested). I’m looking at how I felt – during and afterwards!

For this test ride, I went to WillRide – Adelaide’s premier e-bike specialist bike shop. I had an amazing experience and Roger was extremely knowledgeable, helpful and keen to make sure I had the best possible experience.

My husband is training for the Cape2Cape next month so he wanted to choose a route that would give him a great workout: a 75km off road special. You can see from the profile of the ride that this thing was chock full of lumps and bumps… and not the lovely lady kind. If I wasn’t on an e-bike, this is the kind of ride that would take me 8 hours or more.

I’m one of those people that is pretty much average at most things. I’m not totally uncoordinated but I’ve never been naturally super sporty so I have to work pretty hard to improve. The eMTB appealed to me as, like some of you out there, my husband is a much stronger and more experienced rider than me which has meant we don’t ride together all that much.

As you can imagine, before my first real ride on an e-MTB I had some pre-conceived ideas of how the ride would go down. I was pretty confident that I’d feel great riding it and enjoy not getting too puffed on the hills. Having the type of personality I do I was also pretty sure the smug factor would be high.

This is something I didn’t realise I stressed about until the eBike made it oh-so-easy. When it comes to turning right through an intersection or going straight across a road that has no traffic lights or crossing area – I get stressed out. I don’t trust myself to be able to judge a gap correctly and to be able to get my foot clicked in and imagine myself falling and getting run over by cars going in both directions.

One of the first things I noticed before even getting to the off-road stuff was that with an e-bike, this fear disappeared. I put the bike into blast-off mode and as soon as I saw my gap in the traffic and put my foot down, the bike helped do the rest.

#2 Hill starts were a dream

Semi-related to the intersection point above, stopping on a hill is always “The Worst”. Whether on a road bike or mountain bike, I’m forever trying to clip in and inevitably I’m in a super low gear (because climbing), and then I can’t get enough momentum to get going and so I get off and push my bike up the hill to a flat point where I fumble around on my pedal and try to get some momentum… Ugh.

With an eBike, it was ridiculously easy. Same method as intersections, just put your girl in KAPOW mode, start pedalling and let the momentum take you to new levels of smug.

#3 It was very easy to conserve battery

So obvs my worst nightmare was that I’d take an e-bike on a long ride and use up all of the electric juice in the first 20 minutes and then have a 20kg bike to ride all the way back.

However, in my e-frugality, I discovered that you can actually use the bike’s super zoom power to get momentum on flats and rolling landscape and then shut it off… and it was pretty easy to keep up the pace from there (so long as there wasn’t a headwind or any kind of incline).

40 km in I had only used 2 bars (see left) of my battery using this method and look at this profile (right):

So this may have not been unexpected to anyone else but, umm, the E Factor so does not make up for not having 5 hours conditioning in the saddle. For some reason, I assumed that because I could ride further and faster because of the e-ness, that it would be able to.

While I felt great on the ride itself, my undercarriage was totes sensitive because the longest ride I’d had leading up to it was around the 1-1.5 hour mark.

Next time, I would make sure I built up to that much time in the saddle in the same way I would on any other bike.

So my husband and I went on this bike ride and for the first time, I was looking around at the nature because I wasn’t mentally writing my own obituary. It was so nice to be able to punch it speed-wise on the bike but feel confident enough to be on koala watch (#straya) and notice super nice trees, properties and just the general scenery around us.

If you live in Australia, this is a relevant factor. For whatever reason, I don’t normally get swooped on bikes. I guess I have a face they don’t hate quite as much as other people’s faces... but as soon as I rode past Swoopie Boys on my e-bike they were all about diving on me.

Just a thing I noticed. Moving on.

#7 I still got a very nice workout

I was pleasantly surprised by this as part of me was expecting to feel as if I rode a Vespa around instead of a bike. The truth is that you can make it as much or as little of a workout as you want. Because the pedal assist e-juice carks it at 25 k/h if you’re reaching any speeds over that it’s all on your own steam anyway.

I could definitely see myself getting fitter using an e-bike because I would feel more confident saying ‘yes’ to more rides which means I’d get out more and be able to do more things. After all, the only way to get fitter and more skilled is to get out and ride more.

Normally I’m so focused on what gear I’m in, what’s up ahead, is that a stick or a snake, why am I so unfit etc… that I forget to eat and drink as much as I should. On the Levo, while looking around at The Nature and being super relaxed about what was ahead, I found I sipped from my Camelback almost the whole time and didn’t at all feel as drained, dehydrated and salty as I normally would after a ride of that length.

#9 The e-power takes getting used to

So the e-power means that you get this speed boost, but if you’re not in the right gear for it you can get taken a little by surprise. On my faithful steed for the day, there were 4 settings:

I chose to flick between Level 0 and Level 2 because Level 1 kind of felt like, “ok so this is like me but with a tail wind”. Not enough to make me feel like I was getting enough of a benefit for the battery drain. After a while, I got accustomed to what would happen when I pressed the juice which meant I would actually shift down a gear or two so I could pedal in time with the new ‘speed’.

For some reason I thought that, within my smugness would be a spattering of guilt. I should be riding this with my own steam etc. But the reality was that I just didn’t! I loved being able to beat my husband up all of the hills. Actually, I don’t know about you but I love to sing while I’m riding and an e-bike not only made this much easier, but I was able to pick appropriately smug songs to sing while whizzing by him at 25km/h going up a steep incline.

E-bikes are super awesome, but not cheap. Make sure you take a few out for a test ride if you’re in the market… however, if they get you out riding more and you can go further and see more – it’s an investment well worth making.