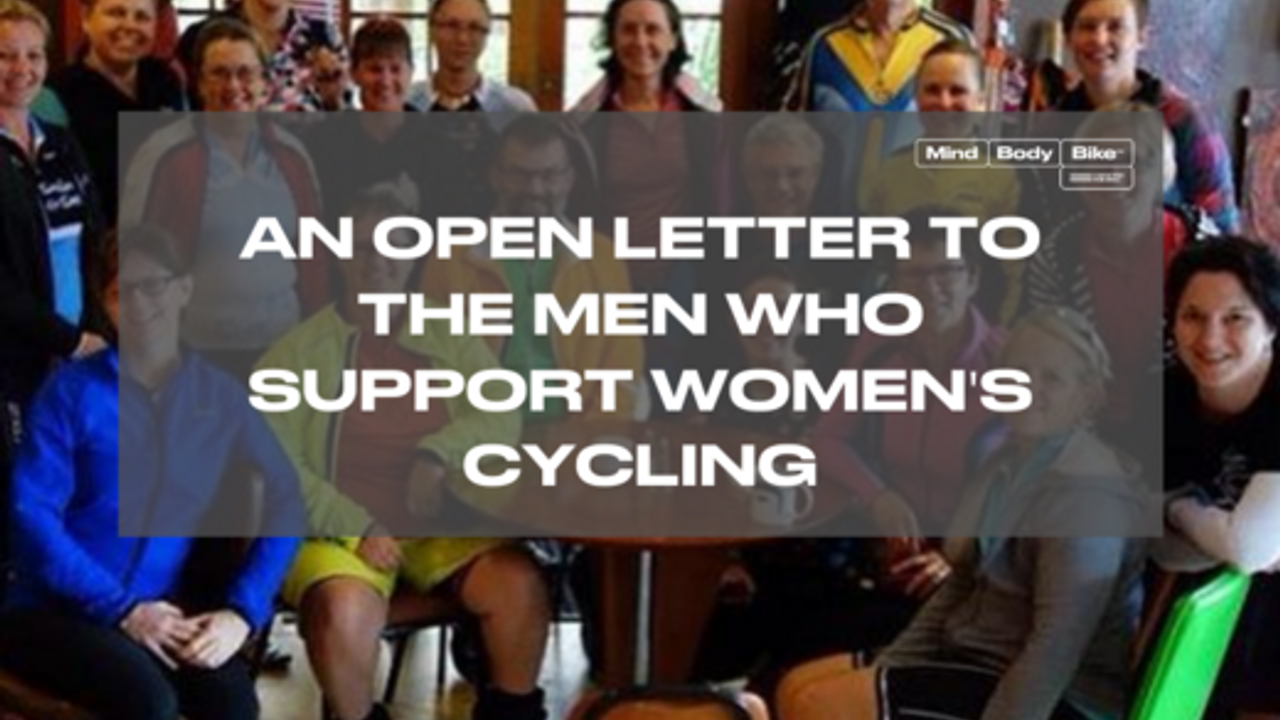 An Open Letter to the Men Who Support Women's Cycling

This is an open letter to the men out there who support women's cycling. To the brothers and fathers who watch our races or events. To the husbands, boyfriends and friends who cheer us on and feed the kids while we’re out. And, yes, to those who seem to have nothing to gain but are willing to risk it all in a society which can be so cruel to those they can’t quite categorise.

Chicks Who Ride Bikes is a group of (mostly) women who ride. We have a wonderful following and can boast being the largest women’s cycling group in the state, if not the country with thousands of members. We are successful because we worked out in which environment women’s cycling thrives and created it. It’s as simple as that.

Naturally, 99% of our supporters, contributors and followers are women. Then there are the 1% who are male.

Yet, despite the fact that it bears a distorted resemblance to the Boys' Club mentality we're trying to defeat, there are still those who would say "Why is he riding with that girl's group if not to perv on women?"

To them, I would say there are two types of people in the world. Those that stand FOR something and those that stand AGAINST something. Each comes with a different level of social receptivity and medium through which to spend your energies.

I choose to stand FOR women's cycling. What does this mean? It means that I stand for women AND all those who share our vision. Whether you are 7 or 70, thin or overweight, newbie or pro, a mother, pregnant, disabled, living with a mental illness, Muslim, Christian, Jewish, LGBTIQ, Black… or male.

Sure - there are some situations where we may ask for a bit of privacy and there will be events which won't work unless a strict ‘women’s only’ environment is created. We know this, because we’ve been doing this for years.

So, who are these men?  How about the mountain bike instructor who helps hundreds of women every year to learn how to mountain bike, to sharpen their skills and to train for their next event?

Or the bike fitter who has worked with dozens of women with chronic pain who, because of his knowledge of bike geometry and the lack of fear and stigmatism he associates with talking candidly about female anatomy, enables them to ride in comfort for the very first time.

Then there’s the community activist who campaigns for the maintenance of a forgotten rail trail in disrepair and organises rides for women who live rurally and can't make it to city-based programs. And, of course, the retiree who recently lost his wife but still makes the time to arrange social rides during the day for groups of older women and mums who can finally take some time for themselves because their kids are in school.

When the bike industry publishes an offensive, sexist ad these are the men who SPEAK UP when it would be easier to just stay quiet (or worse – participate). They are the recipients of well-meaning but persistent jeers about ‘riding with a girl’s group’, but don’t feel the need to defend themselves – they wear their jersey proudly and just smile.

These are the men who encourage the women in their own lives who don’t ride (yet) to get involved.

So when you say "Why is he riding with that girl's group if not to perv on women in tight lycra?" I say “Because he stands FOR women’s cycling.”

We don’t need affirmative action. And we certainly don’t need pity. What we do need is to unite alongside the men who choose to stand beside us.

And if this sounds like you, I, for one, will be there to shake your hand and stand with you - arm in arm - defending your motives for being there.

So, thank you to the “Roosters” standing beside the Chicks Who Ride Bikes. Your numbers are small, but your impact certainly isn’t.