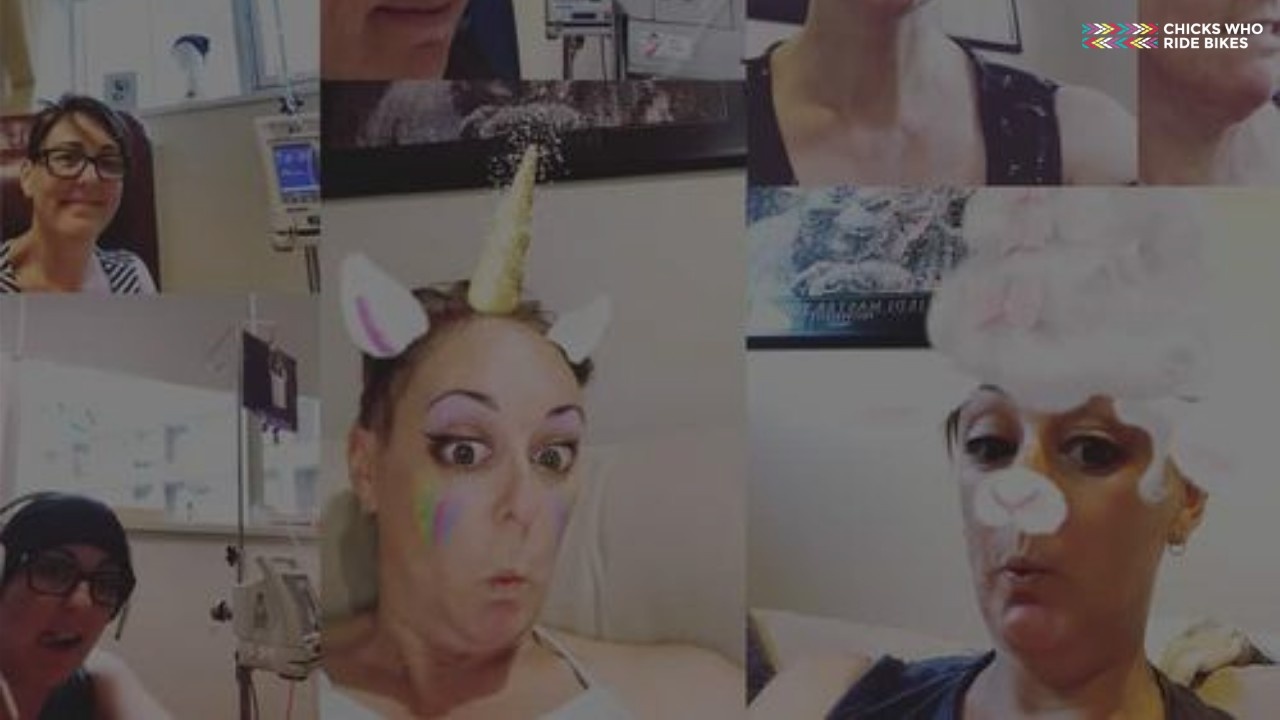 So, the interesting thing about me is once I worked out I wasn’t going to die, I decided that I was going to ride as much as I could after my mastectomy until I had to have chemo. Within 2 weeks of the bilateral mastectomy I was back riding. 1 day before chemo I completed a 17km ride and was really happy. I decided that everyone else who has chemo must be wrong, and that I would be different and fine.

I would only need a couple of days off after chemo and would be able to ride and do normal stuff.

Well let’s just say that chemo drugs really work. I had to learn that I could not control this and had to let myself have some time off. In the beginning - the first few rounds, I could do a handful of rides in between chemo. As the cell killing drugs really stuffed me up, after a while I just couldn’t ride. So far I haven’t ridden my bike for 2 months.

But here is the thing, I was pregnant for longer than this, it’s not forever, and it was important not to ride and get hurt. (This would have put my chemo schedule back, which I was not prepared to have happen, I was finishing on April 19thno matter what!) Some people will keep asking you if you would like to ride, and this is lovely and hard at the same time. I heard a lot of the time, wow you look really good.

The reality was I was often feeling like crap.

For some weird reason, my skin is amazing, and I haven’t turned into Skeletor, and for the most part can get around, so to the casual observer I probably looked not too bad. My mates just wanted to make sure I was invited to a ride, but I knew I couldn’t keep up, my brain wasn’t working properly or I was really fatigued. I just had to say “No thanks maybe next time”. Just remember it's not forever.

I went through all the MTB race calendars, and set goals for races and rides after June this year. I’ve locked away some gravity endure rides, a DH ride and a couple of XC 4 hour rides. Watch out I’ll be back soon! What I wish people had told me Losing your hair is weird. We have seen those movies where the “cancer” patient is losing their hair and how bloody terrible it is. Well I won’t sugar coat it it’s not great and within 3-4 week you start losing your hair. What you don’t see on the movies, is that all your pubes fall out first. One day you go to the toilet, and

WTF your undies are full of pubes!

Then you sit there thinking well do I shave them? Wax them? How do I deal with this situation? Then comes your head, armpits and arm hair. For some weird reason my leg hair stayed around for months. On the plus side I have the smoothest armpits you have ever seen, and I have calculated that I have saved my self probably $1000 in waxing and hairdresser appointments. Winning! Dexamethasone is the devil drug…. For 1 day I have mania and can clean the house and run around like a crazy person and speak at a speed which normal humans can not understand. The next day my tolerance for the humans of the world is not great. I had to tell my family I am really sorry but mum has taken her angry pills they should all go out for the day.

Then the next day it’s all about the crying. Think extreme PMT... I didn’t throw up, I slept a lot, I could not poo for 5 days, slept for hours and hours and then had raging diarrhoea and was generally feeling crap but didn’t vomit. Bloody movies they were wrong again. I had this idea before starting chemo, I was going to eat really well, and clean. Green smoothies, salads, quinoa the whole thing. Once again my digestive system decided otherwise, the week after chemo you just have to eat what you can. For me processed carbs were the only thing I could tolerate. You will lose you sense of taste. For the last 4 weeks I haven’t been able to taste my food, unless it is really salty or really sweet, avocados taste like metal, and my raging heartburn stops me eating most foods. I also decided that I wouldn’t need all the extra drugs.

Once again I was wrong, and pretty quickly decided that to have a better quality of life it required drugs to help you poo, drugs to help you stop pooing, drugs for heartburn, Panadol, injection to stimulate my bone marrow to make more white blood cells, drugs for nausea and the list goes on. I’m telling you now, I wished someone had just said, don’t be stupid take the drugs. Doctors, hospital and nurses are mostly amazing, but the different departments don’t always talk to each other. Waiting, appointments, injections, chasing up information will be your life for 6 months. It’s not easy to be tolerant of this when you feel like crap and you are on the angry pills.

When I was in hospital with a neutropenia (no white blood cells..), a nurse was showing me how to inject my self, and her comment was “oh good you have plenty of fat to inject into” Again WTF is wrong with some people! Like I don’t feel shit enough asshole! More appointments, more anaesthetics, ports to have put in and you start to feel like a robot, and barely human some days. The way I got through it was to remember there are always people in a worse position, its only for a set period of time, and all of these amazing medical people they do actually want the best for me.