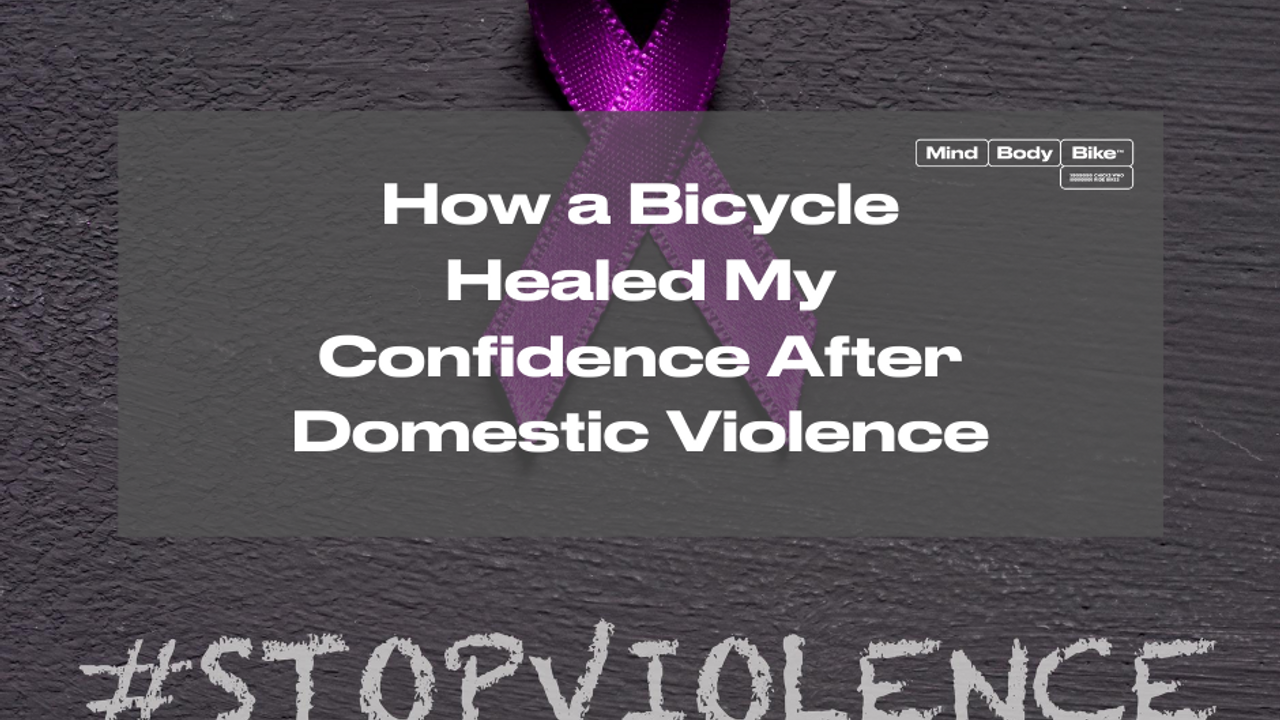 How A Bicycle Healed My Confidence After Domestic Violence

This isn't an easy chapter to write, but it's one that's incredibly important. Not just for my overall journey but for women everywhere you may be experiencing the same thing, or know someone who is.

I met him just after I split up with my husband. I got married young, only 22, to a guy I had been dating 3 or 4 years. We were in love in the way that teenagers and young people are in love and we grew apart in the way that makes you realise how foolish you were to get married so young. What my mother must have been thinking...

So when I met Don (*not his real name), it felt exciting to feel connected to someone again. He seemed so intensely passionate and crazy about me, which was something I had been missing in my short-lived marriage. Don made me remember how much I loved feeling loved.

As I had been accustomed to being in a 'married state' - ie living together and sharing a house - I was keen to move quite quickly into a similar situation with Don. Essentially, I was trying to fill a void in my life with someone new. I liked being married. Perhaps the only missing puzzle piece was to whom?

The first few weeks were a whirlwind. Don was a professional golfer and I was quickly swept up into his world. He loved having me on his arm at events, and I loved the attention. By this stage I was still in my mid twenties so for me it was like walking on a cloud.

I don't really remember the first thing that changed. There wasn't one small detail that stands out as a red flag... because at the start of a relationship you're so willing to excuse any behaviour of the person because you're infatuated. You think you're in love. And that's exactly how Don wanted me to feel.

I guess, looking back, it started with slight possessiveness. Small comments like "You look far too sexy in that dress - everyone will stare at you!". These kinds of comments are designed to make you feel amazing about yourself - after all, he's made you feel so good on his arm that it seemed he liked when people stared at me.

Next came comments like, "Who are you always texting? I hope it's not another guy." said jokingly, with an elbow nudge and a twinkle in his eye. Nothing really to make you feel as though there is a jealous streak. Just a reminder, I rationalise, to really be present when I'm with him and not on my phone. What a great guy, I would think to myself.

Then, it was the "Who are you meeting tonight? I want you all to myself, why don't you just stay home with me?" comments.

See, an experienced abuser knows how to give affection and then take it away making you crave it more. Good behaviour, such as staying home instead of going out and not texting friends and family, is rewarded with affection, passion, gifts.

It's not that "bad" behaviour in the eyes of the abuser is punished right away. That's how it was for me. Don created a perfrect situation where I wanted to please him. He made me feel good when I followed what he wanted me to do. Plus, there was always a little voice inside my head that made me feel as though my marriage hadn't worked for a reason. Maybe that reason was me? Maybe what I need to be "fixed" is to listen to this man who seems to love me so much.

One day, he told me I was too beautiful to go to work. He didn't want anyone at work to be able to steal me away from him. He told me he wanted to take care of me. But then, when there wasn't enough money for rent that week, he told me I'd need to sell some of my jewellery to pay my share - a gold chain from my mother. Earrings and a necklace I'd gotten when I was 16. He drove me to a pawn broker to sell these items and give him the money.

No longer was I allowed to go out and see friends.  "You're such a slut." he would say, whenever I went to arrange a get together. "Why would you go out looking like that if it's not to go fuck everyone else?"

I would shrink back in shame, and decide perhaps it was better to stay home. He loved me, right?

Then, my phone access was restricted. "All we need is you and I, baby, Who else do you need? Plus, we're on a tight budget, better if we share a phone."

And that, was when the serious problems began. He became angrier. Moodier. Unpredictable. He would sleep with the phone under his pillow so that it was impossible for me to use it without permission.

He demanded that I stop showering and going to the bathroom with the door closed. "What do you need privacy for? What are you hiding from me?"

I found myself growing afraid of Don. It was at this point that I hadn't shared anything on Facebook for a while and messages being sent to me went unread and unresponded. Friends were starting to get curious about where I was.

He started to let me speak to family members and friends on the phone, but only while sitting in the same room as him so he could monitor my conversations. His gaze would burn into my skin from the other side of the room.

I refused to believe that was who I had become. And so, I rationalised everything once again. It's just a rough patch, I would say to myself. Things will get better and we can look back on this and laugh.

But things quickly got worse.

I'd taken to pretending to still be asleep when he woke up, and I must have done a convincing job because one morning when Don went downstairs, he didn't bring the phone with him.

As soon as I heard him reach the final stair going down to the kitchen, I snatched the phone and ran into the bathroom, turning the shower on. My hand was shaking as I dialled the phone - the number of my best friend since childhood. I didn't know whether I would tell her, I just wanted to hear her voice.

As soon as he heard the shower running, Don came sprinting up the stairs. I had shut and locked the bathroom door which was a big no-no. He began banging on the door, yelling at me to open it up.

Oh god, he's realised I've got the phone, I thought to myself. He's going to kill me. What do I do?

The call never connected, and so I very quickly took off my clothes, wet myself very quickly in the shower, wrapped a towel around me and placed the phone in the only place I could think of.

Between my butt cheeks.

I unlocked the door and pretended that it was just habit that made me shut and lock the door, but he was already furious. He threw open the door, pushed me aside and started opening and slamming cupboards and drawers in the bathroom, thinking I'd stashed the phone there.

He then turned his attention on me. I'll never forget that face. Menacing. Evil. Almost excited that I'd given him an "excuse" to hit me.

And it was at that exact moment - with a phone in my ass, naked, with a man clenching his fists coming towards me - that I knew I had to get out of there.

So what does this have to do with bicycles you might ask?

Well, after the assault, I planned my escape. There was an internet cafe down the street from us in a strip mall. I would wait for Don to get up, I would get dressed, bring what I could carry, and sprint for the strip mall.

When I got there, I asked to use one of the computers. It was one of those places where they let you pay at the end. With no money, I jumped on the computer and logged into Facebook and my emails. I fired off emails and messages to the same childhood friend I had tried to call in the bathroom. Hopefully she would respond before Don realised I had gone and come to find me.

"No time to explain. Need your credit card details for a flight to you, ASAP."

Within minutes she responded with her credit card details and I was saved.

what does this have to do with bicycles you might ask?

Fast forward 12 months. It took me a long time to get used to being my own person again. I was distrustful of everyone. I hated men. The self-confidence he destroyed during those 6 months together took a long time to build back. It certainly wasn't an easy road, reintegrating with society. I'm certain I had PTSD or some version of it, at least. I had trouble sleeping. I couldn't concentrate. I started lying about my whereabouts and became incredibly suspicious of anyone, including friends and family, who wanted to know where I was and what I was doing.

In short, I lost sight of what was normal behaviour. I'd so badly misjudged and misread almost every single sign in my previous relationship. Maybe I was a terrible judge of character. Or maybe everyone is evil.

That year, I started riding bikes. Which, looking back, was the best decision I ever made.

Not only was it an incredibly empowering and freeing experience, the bike became my barometer for my mental health.

I no longer relied on anyone to get anywhere. Everything was off my own bat. My own energy. Me. Just me.

I believe the bike helped heal me because it became something normal. Something routine that I could measure other things against. I know that probably sounds strange, but when you lose your sense of what's normal, what's real - how do you know what's happening around you?

For me, it was bike riding. If I found myself not wanting to ride for a few days, I'd know I was regressing inside myself, avoiding contact with people, so I'd force myself to get out and about. If someone tried to prevent me from going bike riding, I'd know that was not normal behaviour and a red flag should pop up.

I never really had any hobbies or anything that was truly "mine" before riding bikes. I loved that riding bikes gave me a close social circle; a group of people who would know for sure that something was wrong if I stopped turning up.

Bikes gave me a way to heal my confidence. I could learn to do new things. I could be good at things again. I could connect with people in a normal way.