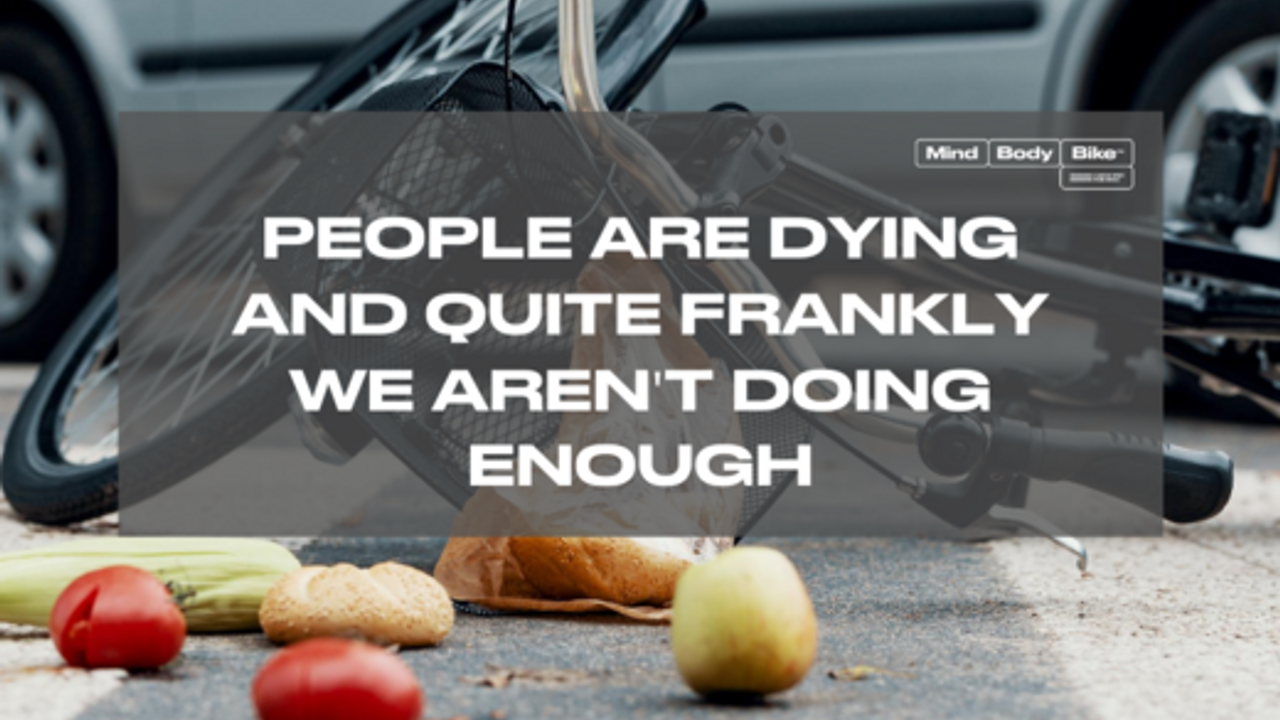 People Are Dying And Quite Frankly We Aren't Doing Enough

We see it on the nightly news. We see it on our newsfeeds. Cyclists are injured and killed on roads every single day. Mothers, daughters, sisters, fathers, sons, brothers… friends. We are shocked, saddened, angry.

We agonise over what if’s. We fill cards and notes with messages of grief. Hell, I just put the phone down after sending a friend a condolence message after her cousin was killed on a notorious stretch of road in Brisbane.

It’s f*cking awful. And you know what?

Most of us don’t do nearly enough to help fix the problem.

Before I started cycling I had no real idea about (or interest in) the politics of transport planning and infrastructure. I didn’t much know or care how decision were made or who made them. I just went about my day using what was available to me and not much thinking about it. To be blunt – as a non-cyclist, I had little reason to care about how decisions were made about the infrastructure I would soon depend on as a primary mode of transportation and key element of my leisure time.

It really wasn’t until I became the accidental figurehead of a women’s cycling organisation that I was suddenly made aware of the plight of those who campaign on everyone else’s behalf. These are the people in your community who take time out of their own day to day lives to campaign for that new bike path you enjoy, or the safety barrier on that intersection you hate. They are the ones who turn up to town hall meetings, stop by their local politician’s office and actually SPEAK to the politicians we often see street-side with their sandwich boards and balloons prior to elections.

They are the ones who, after reading an article about the death of a cyclist, don’t just comment on what a tragic loss it is and how their thoughts are with the family. They don’t just hug their own relatives a little tighter the next time they see a story on the news about a cyclist paralysed from the neck down after being hit by a car. They are the ones who get off their asses and they campaign to fix the problem.

And, sadly, that’s an extra step too few of us actually take.

There are people in your neighborhood right now that spend their spare time thinking of ways to make your street, your suburb and your town a better place to live. They are the campaigners. The silent do-gooders. They are the invisible heroes because they are the ones actually DOING the work it takes to get the things we all take for granted.

Sometimes they work for larger bicycle advocacy groups. Sometimes they start their own groups to target a particular area. But what they all have in common is the passion for making YOUR city bike friendly.

And it’s time we all take the time to find these people, and thank them for the work they do behind the scenes that we all benefit from. By way of thrusting a few into the spotlight, we asked our local cycling activists from Bicycle User Groups 5 questions to find out how they got involved and how we (and you) can too…

1) How was it you came to be involved in bicycle campaigning?

Belinda: I was riding to work regularly because traffic congestion was terrible on my cross-town commute, but I had to take some crazy round-about routes to avoid the main roads, and even then, there was a short section of Moggill Rd which was unavoidable but seriously threatening even to a fit and confident rider. Then Richard Pollet was run over by a truck not far away, which made me really angry about the poor conditions I had to deal with to be able to ride my bike to work, and that got me thinking about what I could do to change things.
When Council first started talking about the Wynnum Road widening project, I went along to a public consultation and discovered that they had no plans to include a bikeway, even though they were resuming people’s homes to have more room for the road corridor. That’s when I started writing letters.

I also got talking with Peter Berkeley, who was the president of EaST BUG, and he convinced me to get involved as the group needed a secretary. Less than a year later, he moved to the country, and the group was looking for a new president. EaST BUG had existed as a community organisation for 10 years, and had established a lot of credibility as a calm and reasonable, but persistent lobby group – so now I feel a real responsibility to keep that legacy going. And I really want to see some decent cycling infrastructure on the east side of Brisbane!

Aaron: After some minor health issues and putting on weight, I returned to my childhood passion – cycling – for mental and physical health. I then discovered how bad things were for people who cycle but didn’t know how to do anything about it. A work colleague invited me along to the CBD BUG meeting where I met a lot of like-minded folk, and through them got in involved. The CBD BUG has a really successful strategy of focusing only on issues that members are personally prepared to advance, and being prepared to call out bad policy decisions within all levels of government at the risk of being invited to the consultation table.

Paul: I was one of a group of about a dozen or so disaffected BQ members who started to meet to discuss what BQ should be doing on the advocacy front. In a twist of irony it was Ben Wilson who suggested we should form our own BUG. LOL.

Andrew: I had been thinking about it (activism) for a while. I went to A CBD BUG meeting and wanted to do something for where I lived and rode.

Mitch: I was minding my own business riding to work at the airport each day when the Brisbane Airport Corporation decided to ban bicycles from all airport roads. They can’t do that!

2) Do you think more people should get involved? If so, why?

Belinda: Yes, the more people speak up, the more politicians will pay attention. It’s not the technical people we need to convince – it’s the people who decide where the money is allocated. They are very sensitive to public opinion.

Mitch: Yes, because I’m really terrible at it, so if its left up to me, were all screwed.

Aaron: As with anything, the more people involved the better. Activism isn’t necessary, sometimes just being vocal in your own social circles can change the status quo.

Paul: Yes – Brisbane is a target rich environment for cycling advocates because this city’s cycling infrastructure is still non-existent or a sad joke. As more people become involved this adds more ideas/skills/knowledge and spreads the workload, plus more voices are increasingly likely to make decision makers sit up and pay attention and realise we are not going to go away.

3) What are your largest hurdles in getting ‘things’ done?

Belinda: There is so much shuffling of responsibility between Council and State Government – who both cry poor (although they can spend huge amounts on road projects). Election cycles are short, and it’s difficult to see a strategic plan for better bikeways, so we end up with scattered projects and then wonder why so few people ride. Imaging building a railway network like that.

Aaron: I think the biggest hurdle is the intransigence of government policy makers. Even if there is overwhelming evidence of better policy, government decision makers always trend towards the uncontentious status quo in fear of the loud dissenter who trots out the uneducated rage. This is why just having conversations about cycling issues with friends and family can be important. The second biggest hurdle is groups that have their own agenda, or serve to undermine progress, who pose as advocacy groups and suck up limited media coverage.

Paul: Fitting in cycling advocacy around work and family commitments

Andrew: Finding the time to get in front of people.

4) What is your advice to people who want to get involved but don’t know where to start?

Belinda: Talk to your local BUG. Join discussions on social media. Start conversations with your work colleagues, neighbours, local businesses, parents at your kids’ school, etc. Most importantly, find out who your local councillor and state and federal MPs are, and make an appointment or phone call to talk to them about your concerns.

Mitch: Call me! We need help handing out bike propaganda at a Space for Cycling BNE market stall.

Aaron: As above, a great place to start is to just have conversations with friends, work colleagues, and family. Get along to a local BUG, and if there isn’t one then start one! Focus on local, small wins in your area, like local routes that are missing, connect with your local politicians and talk to them about the problems positively and politely.

Andrew: Come along to a meeting and see what you think. There are lots of ways to get in touch, Facebook, email, website and meetings.

5) How can people start their own campaign in their hometown?

Belinda: Perhaps start by focusing on a particular issue, and gather people with similar goals and interests.

Andrew: Gather a group and start talking and identify the problems and come up with some solutions. Reach out to other groups and work out ways to leverage of each other.

Paul: Talk to other cyclists in your workplace or at the local cafe, ask them if they’re unhappy with their conditions, tell them your ideas/solutions, and call a meeting using social media, email, flyers etc. This link has tips for starting a workplace BUG https://www.bicyclenetwork.com.au/…/Workplace%20BUG…