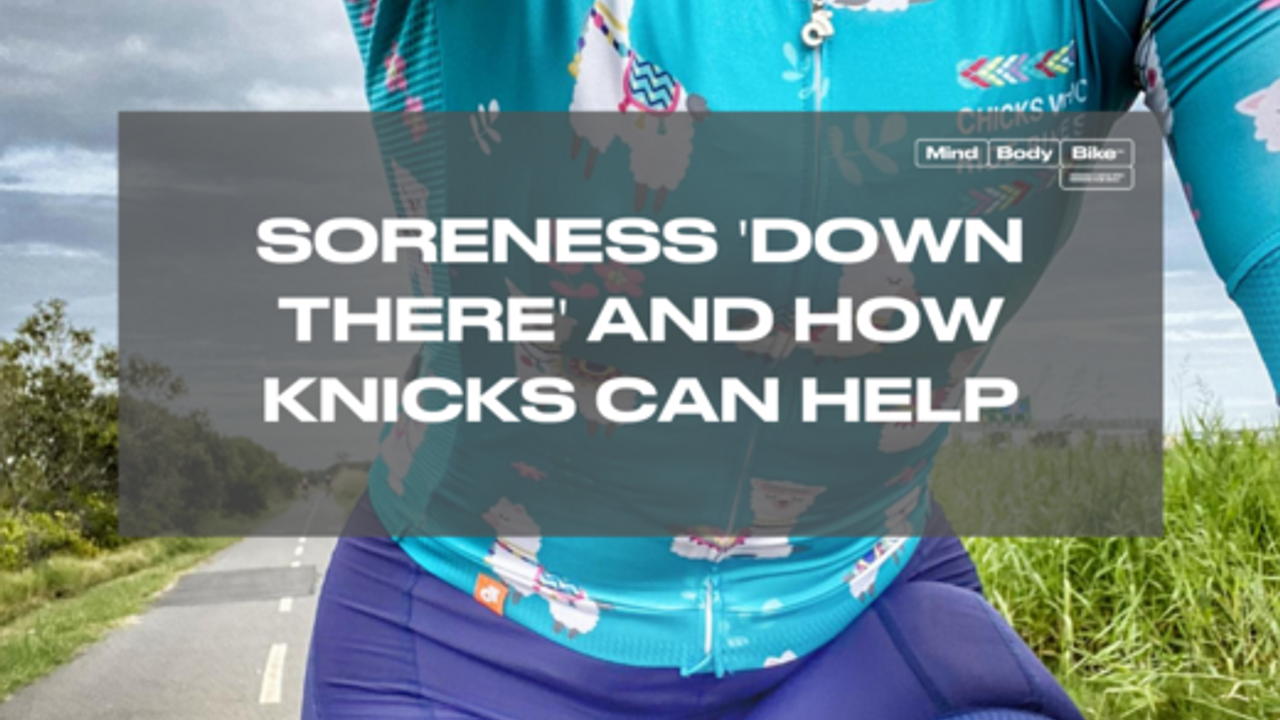 Soreness 'Down There' and How Cycling Knicks Can Help

One of the most common questions we get asked is around what to do about a soreness 'down there'.

If you've ever felt the rubbing, pinching, soggy hell that is a crappy chamois, you'll understand it when we say that the chamois can be a girl's best friend or her worst enemy, depending on a few very important factors.

First thing's first: if your discomfort involves soft tissue pain or numbness in the front - that is to say NOT your sit bones, but your genital area - you'll need an adjustment of your seat angle, height, fore/aft or the width/shape of the seat itself, because that is not normal, nor is it something you should put up with.

It isn’t unusual to find a change in shape or size of your, erm, soft bits, when you’re riding a bike regularly. Some 'smushing' is normal, but if you’re worried about pain or specific changes you should pop into your GP or OBG for a check up.

Remember, there is no such thing as normal genitals. There's only 'normal for you'.

CONDITIONING IN THE SADDLE

If you're just getting started, and your discomfort doesn't involve numbness or pain in your front soft tissue, it's important to give yourself time to create some conditioning to the saddle.

It’s pretty common (and totes normal!) to have a sore butt when you start riding or significantly increase the amount of riding you’re doing. If the pain or pressure is around your sit bones, it's probably a conditioning issue.

Sitting on any seat for a length of time, whether it's an office chair, a bike seat or even a saddle for horseback riding, take some getting used to.

If you're experiencing butt soreness after a ride, there are two really simple things you can do straight away to really help. The first is to skip tight clothing immediately after your ride. The second is to sit down with some frozen peas down there.

Aside from conditioning, our top tips week to alleviate sit bone soreness include:

I can't stress this one enough. Your. Chamois. Needs. To. Fit. Firmly.

If you're new to cycling, you're probably already feeling a little self-conscious of seeming as though you're putting your entire punani on display. But at the end of the day, your bib knicks should fit firmly - as if you're wearing a brand new pair of tights or leggings.

Don't get us wrong, they shouldn't affect your ability to breathe, and they shouldn't be so tight that your legs and belly spill out, but you should feel nice and snug in them.

Honestly, too much room for movement in there and you're inviting chafing and bad things to happen.

Tip: Give ya’self a wedgie

Put simply, your butt will hurt less if your knicks are flush on your skin, as it helps to prevent any chaffing or unnecessary readjustment when you get out of your saddle and sit back down.

You may require differently fitting knicks depending on that time of the month, whether you're pregnant, whether you've lost or gained weight recently... Lots of factors may impact how firm your knicks fit.

The best cycling knicks include a quality chamois (the pad itself), but how do you know what that means?

A great design alone won't stop your tushy from getting sore, because if the fabric and the pad aren't high quality, it's like wearing a pair of cheap shoes... they just don't do the job.

When you put your knicks on, do a little bend and stretch to make sure your knicks are scooched right up against your body. Your butt will thank you!

Just like saddle widths, chamois can be longer, shorter, wider, narrower, all of which will suit some people but not others.

If you ride a wide saddle, consider knicks with a chamois that's wider. If you ride in an aggressive or 'aero' position, make sure the chamois will cover the nose of the saddle while you're leaning forward.

Not a topic for a work dinner, but it's an important one to cover. Knicks are designed for going commando in. When I first started cycling, I refused to take off my underwear beneath my knicks. It just felt too... squishy. But then I learned more about the chamois itself which have an anti-bacterial element to them which help trap bacteria and trap any 'odour' you're paranoid of emitting.

Ditching the underpants will mean less friction, less chance of skin tears and infection and an all-round better experience on the bike.

We're all for being thrifty, but knicks are one of those things where if you wear them out, not only will people likely be able to see your butt crack through them, the chamois will lose the properties that made it effective in the first place!

It's like when you get a fresh pair of socks or undies to replace ones you've had for a while... you didn't know you needed them until you put them on.

However minor this might seem, cycling is an activity that has a lot of repetitive movements of your legs. Think about how many times your legs move up and down in just a short bike ride to the shops!

Make sure the centre seam of your knicks at the back are lined up with the centre of your butt crack.

We often jump on the bike in the morning straight out of bed, or at night after a day behind the desk, without a lot of preparation or warm up.

To get the blood flowing throughout your body, it pays to do a few minutes of activation before jumping on the bike.

It doesn’t have to be a complicated calisthenics routine, even a bend and stretch routine is sufficient to make sure those good juices are flowing.

Then, when you jump on the bike, run your finger down from the seam on your knicks to the centre of your saddle (which will often be either a gap or a point) and make sure they line up.

Depending on your knicks, the age of them or how many times they’ve been through the washer, your chamois may get a little tough.

This is normal, (and replacing your knicks isn't a bad idea) but there is an easy fix: Chamois creme - which, despite its name, chamois creme is applied directly to the skin.

With a very quick google search, you'll see there are some great products on the market you’ll find at your bike shop, or alternatively you can use some heavy duty moisturiser like sorbelene.

"Pop your knicks on, reach on down there, and apply directly to your skin... then wedge that chamois right up to your skin and voila!"