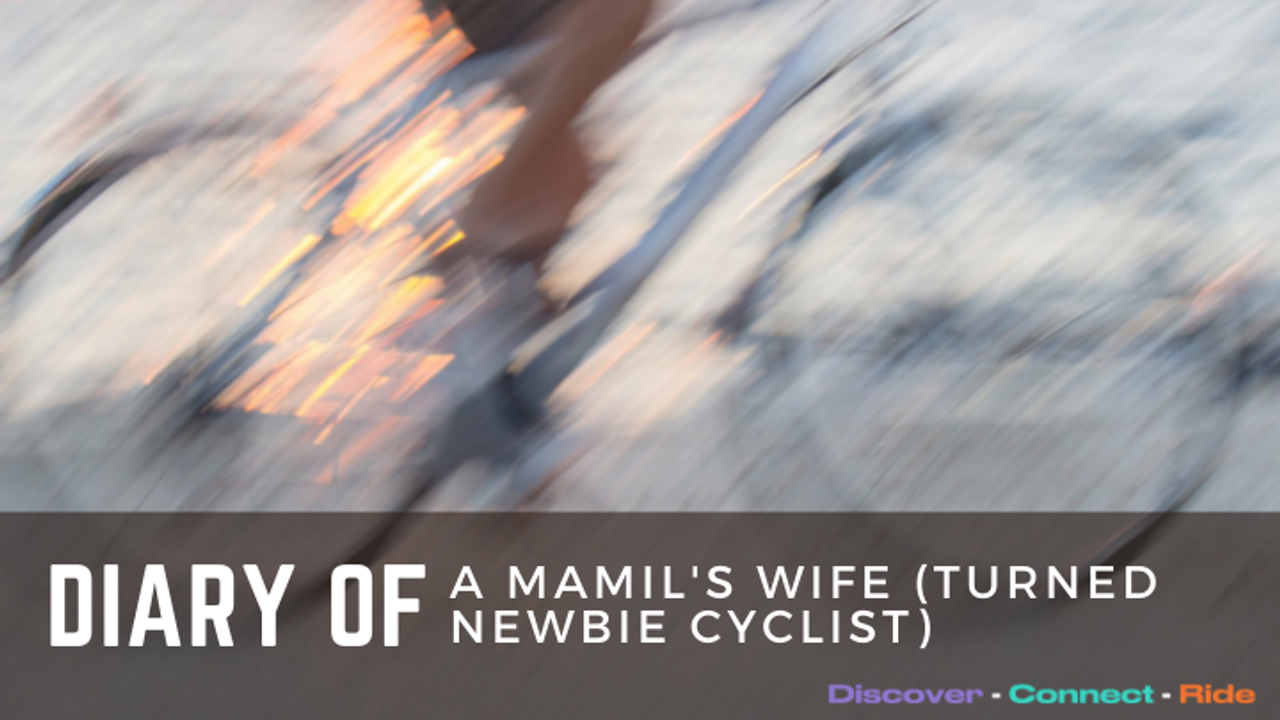 Three is the magic number.

What does the number 3 mean to me? Two cats plus one guinea pig… two sons plus one husband… the embarrassingly small number of questions I usually get right on University Challenge.

Or, to be more cycling-specific, it's how many bikes I have (too many? Not enough?), the years I have been cycling, the sizes I have dropped in that time, and the hours it took me to climb Mont Ventoux last summer.

From here, as the years inevitably increase and hopefully too the weight loss, next time I visit the windy mountain I'll be aiming for 2 hours, I might get a bit better at University Challenge, and 3 won't be my magic number any more.

Cycling is a sport dominated by the harshness, the glory, the superstition around numbers: speed, cadence, power, distance, calories, gradients podium places... but as much as you can try to quantify life in measurable terms, the goalposts move, things take different directions, and it's the words, not the numbers, that remain as the most meaningful record of what we've done.

My current cycling story began when I became the stereotypical hobby widow as my husband approached his mid-40's. He was out riding every weekend, scrutinising his stats, raving about his Felt F5, group sets and ratios, doing immense sportives, which always featured big numbers, coming home sweaty and exhilarated. I was not interested. He spoke a language I didn't understand. Spent money on things I didn't understand.

Like most hobby-weary partners, I humoured him by watching the Tour de France once a year and was clueless when I tried to buy him something reasonably suitable for Christmas. Then my mum called. "There's been a big box delivered - I think it's a bike". Muttering grumpily that he's already got a bike, he'd better not have bought another one, I called around to pick it up.

"It's addressed to you" Mum said.

Fast forward 3 years and I realise that that generous gift was a lifeline. Joining the cycling community saved me from depression, obesity and from becoming a really unpleasant resentful person. Gave me a purpose. Made me friends. Made me smile.

When I unpacked that bike at 42 years old I was an overweight mum of 2, working full time, drinking a lot of wine, baking (and eating) a lot of cakes, worn down by a relentless struggle to be a "good enough" mum, a "good enough" wife, a high-performing professional, and managing a huge building project alongside the day-to-day drudge of washing, packed lunches and pulling last-minute costumes for World Book Day out of thin air.

I was fat, I was tired, I was plagued by IBS and acne, my confidence had plummeted and the very suggestion I might make some time for exercise would always be met with hostility.

I did try a bit of running, on my own, in secret, and I found it so hard, so slow and pointless, unenjoyable and ridiculous, it just sent me back to the biscuit tin. All these standards I had set for myself were destroying me and preventing me from enjoying life but I felt trapped and directionless, and I didn't know what to do.

So as well meaning as that gift was, because of the mindset I was already in, I was really sceptical about what I was going to be able to do with it. I hadn't ridden a bike for 20 years. I had no kit. I borrowed his helmet and wore leggings and trainers to go around the block.

Not a clue what to do with the gears, so I was clicking and rattling all the way, but then something else clicked - it was a memory. When I was 15 I had a fabulous bike (unfortunately stolen but when I see old ones come up on eBay from time to time, I get a pang of nostalgia) - a Raleigh Wisp, two-tone blue with velour bar tape and saddle, brake levers on the tops, gear levers on the down tube. I used to wear a white skirt (well, it was 1985! Choose Life!) and would ride it up to Colmworth, a village about 5 miles away where a boy I liked lived.

And I don't remember anything about those rides being difficult or scary, uncomfortable or ridiculous. I don’t remember being hot and flustered, red in the face or sweaty. I didn’t think about taking any water or ride food, I had no puncture repair kit or mobile phone if I got into difficulty. I just remembered the free feeling and the quiet, and that before you knew it you'd done 10 miles without even trying.

That bike provided a gateway to independence for teenage me - it got me to school, to swimming, to town. I carried 100 newspapers on the luggage rack every Wednesday after school and earned my first money. My bike helped me grow then, and maybe it could do again.

I am not cuddly mum. I am not baking cakes. I am not making someone else happy. I am not feeling put-upon, depressed, invisible or ridiculous. I am a strong rider. Those words gave me power, gave me identity and belonging. Validated my efforts and lifted my confidence. Plunged a soft, molten me into the bucket of cold water and pulled me out as cast iron.

Of course, those are just words.

The truth is, I am not always strong. Mont Ventoux saw to that. About half way up, where the gradient reaches 13%, and you know there is still over an hour's hard riding ahead, a couple of small boys at the side of the road cheered me on. "Bon courage!!". That made me cry. The words of those little sprites, strangers who reminded me of my big kids at home, lifted me further with every pedal stroke. Nearly at the summit, but seriously flagging, another few words drove me on.

Nicole is a fantastic climber and had already got to the summit, then incredibly selflessly had come back down to find me. "It's only 3% from here, the last kilometre!" – a blatant lie but it was all I needed to make the impossible feel achievable. It's a phrase that has since become our group's code for dealing with any hill that looks like it might be a bit 'tasty'.

Ah yes. Our group. A graphic designer. An event producer. A flight attendant. A midwife. A writer. A train driver. A scientist. Tinker, Tailor, Soldier, Cyclist! A completely random group of women with only two other things obviously in common; where we live, and what we do on a Saturday morning.

But we all speak the same language when it comes to riding; it's a language full of encouragement, humour, drive and passion; where a few choice words between you can get you over that hill, through that beastly headwind, or all the way to the finish line. The language I didn't understand when my husband and his fellow riders came swaggering home from a good morning out - I get it now. Of course, when there's only one scone left at the cafe stop it's every woman for herself, but our group is about laughing, sharing and lifting up. We just happen to be on bikes at the time and through those rides, those relationships, those challenges and victories, my own 'few words' have emerged, 3 small words: